Two J Dilla songs that made me a fan forever.

I first heard about J Dilla when he went by the producer name Jay Dee. There was a Hiphop group called The Pharcyde that I became a fan of when they released their debut album, Bizarre Ride II The Pharcyde in 1992'. It had been about 3 years since that album and I was anticipating their following up. I used to watch Rap City all the time cause I loved to catch the music videos. One day, Pharcyde released their new single from their sophomore album, LabCabinCalifornia.

Yo. I thought I was watching the dopest video ever. The beat drops and immediately catches me cause the sample is playing backwards, baseline groovin', and the drums are snapping. Next thing I know, The Pharcyde is performing in the video backwards, yet it's replayed backwards! The beat and the video were a perfect marriage in creativity to me.

That was my first impression of the producer Jay Dee and the power and feel of his music!
The Pharcyde album led me to check for ANYTHING that Jay Dee would release from that point on.
After that, it felt like every album I looked forward to checking out had Jay Dee or Jay Dee of The Ummah on it.

By this time, I was a definitely a fan of Jay Dee. The drums. The baselines. The samples he would pick all resonated with the vibe and feel that made me love Hiphop music even more. It felt like I was watching one of the future kings in the producer realm of Hiphop in realtime.

However, it was when I heard this joint that made me a fan forever.

I first heard Slum Village "Players" in 1998. I was in Ypsilanti at a local club off Cross St. across the street from my alma mater Eastern Michigan University. The DJ dropped this record and it made me nod my head differently ever since.   The swing of the drums, the heavy claps, the sample chop, the way the bassline was jumping through the speakers in the club were hypnotic. I NEEDED that record. The very next day, I searched to find this record. I got lucky and copped a  white label at a local Ann Arbor record store. This was before I even had my own turntables to play it.

"Players" is my favorite because from this record, I learned about the group Slum Village and their heavily bootlegged debut album Fantastic, Vol. 1. I also learned that Slum Village was from Detroit Michigan, where much of my family tree was born and raised. I still never saw a picture of Jay Dee or Slum Village to put match their faces to the music. It wasn't until March 99' when I went to the drug store and ripped out an article about Slum Village written by my man Khary Kimani Turner, in a magazine called "Rap Pages" in the "Next to Blow" section.
I was finally able to put the face to the name Jay Dee.
Now I knew what I my favorite producer looked like, how he sounded, and where he was from.
Jay Dee continued to solidify his spot on my all time favorite producers list.
Jay Dee crafted his own unique sound that ultimately gave Detroit it's own signature sound to embrace part of our Hip Hop identity and culture. For me, being that Dilla was a cat from the Eastside of Detroit, who stayed in his basement listening to records and making beats and made a name from himself around the world inspired me. His influenced was too close to home for me not to be inspired to carry on the legacy of that spirit in my music.
Thank you Jay Dee for everything you gave.
I'm still studying the masterpieces you left behind. 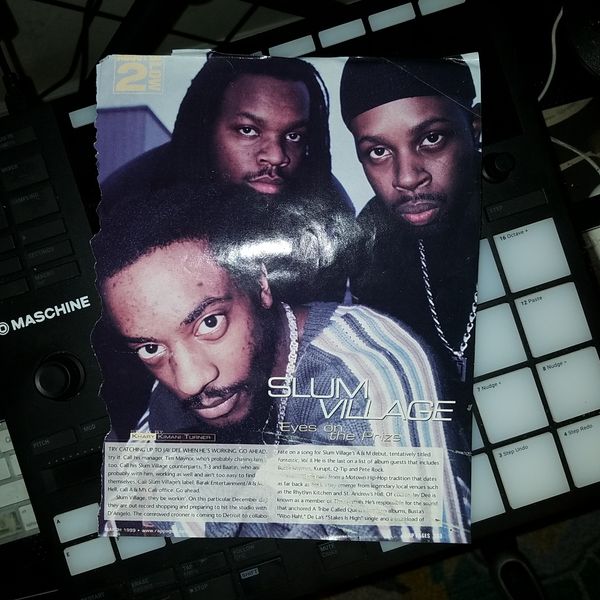