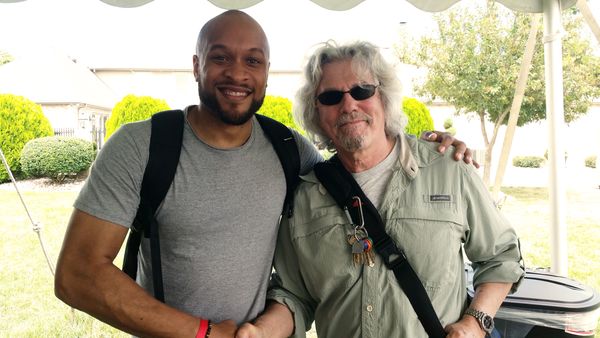 Can't believe I actually met legendary Recording Engineer Bob Power. I got to tell him he was an inspiration to me, one of my favorite mixing engineers - and thanked him for his work!

Similar to how Steven Spielberg's movies helped develop my imagination during my childhood, as did Bob Power's contributions in my musical upbringing. I started to create music during what is considered the Golden Era years of Hip-hop (circa de 1991'-96' personally), so that was the beginning of when I would pay more attention to the technical aspects of the records I loved listening to.

That was 1991, so I was about 10 years old at the time. I didn't have an interest in engineering or production yet, but the way that the album sounded and made me feel attracted my attention. I was still young trying to even understand what "Low End Theory" meant (I understand now) As I got older, I began to understand that Bob Power had an ear for mixing music that gave dirty drums, 808s, and raw samples space and clarity that helped shape the sound of Hip Hop.

Way too many classic albums and songs to name that had an impact on me and also trained my ear to what most considered the classic golden Hip-hop sound that my generation grew up loving.

When I met Mr. Power, I didn't know what to ask him. I was in the beginning phase of mixing joints for my group RSXGLD's album, so I mustered enough confidence to ask him just one question...

"Do you have any pro tips for creating space in mixes for samples and vocals when they are in the competing in the same frequency range?"

I'm sure that was an elementary question for him, but he did give me an answer. He smiled and just told me that vocals are always the priority, so he suggested that I make sure I cut and manipulate any frequencies that compete with the vocals. I know it's a simple answer, but I understand how hard it is the have certain conversations without demonstrating it too. Needless to say, I appreciated the fact he even gave me an answer!

If there were one thing that I learned from Bob Power's work, it was about the ability to keep a dirty and raw sound, but  also creating space and clarity in the mix - so none of the instruments are competing with each other. Studying his work also helped me understand and improve the quality of mixing samples into my production.

"My mic is soundin bugged, Bob Power you there?" - Q-Tip

Monumental day for me.